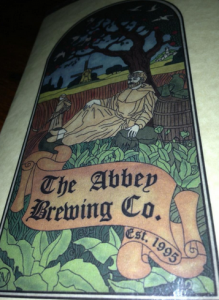 Monday to Sunday 1pm to 5am

# Cervejas
40
# On Tap / Chope
15
The Abbey Brewing Company opened its doors for the first time on Miami Beach in late June, 1995.The “experts” thought that Raymond Rigazio the Brew-master and President of the Abbey Brewing Company was crazy, since South Beach was a haven for Model wannabes who went to clubs and ordered chocolate martinis and Cosmopolitans. The experts gave The Abbey six months to a year at most, but the Abbey proved them all wrong!
The Abbey Brewing Company, with its full bodied beer recipes taped into the local market of down to earth intelligent people who were looking for a small intimate place to chill and have a philosophical conversation over a delicious hand crafted beer.
This cozy intimate atmosphere equipped with Rigazio’s award winning beer recipes, also attracted many international customers and visitors from the states. The combination of excellent beer and a down to earth home like atmosphere has made the Abbey Brewing Company a landmark on Miami Beach.
The Abbey beer recipes are created by BrewMaster Raymond Rigazio and Brewed at the Indian River Brewing Company in Melbourne Florida. The head brewer Jose Ayala at Indian River Brewing Company oversees production of the Abbey beer recipes. This is a great arrangement for Rigazio and the Abbey since Ayala was the Creator of Sam Adams Triple Bock when he worked as a brewer for the Micro Brewing Icon. The experience and knowledge of high gravity brews that Ayala possesses, and the trained palate and knowledge of brewing that Rigazio possesses creates a winning combination that is enjoyed in every glass of Abbey Beer.
The Abbey is opened form 1-pm to 5-am 365 days a year, and is currently serving The Immaculate IPA, Father Theodore’s Stout, Brother Dans Double and Brother Aaron’s quadruple, all on draft.
Visit our beers menu for more info on Abbey Beers
In addition to the four abbey house beers, 10 guest draft beers are served ranging from rare Belgian specially brews and to hard to find American micros. The Abbey also provides a comprehensive bottle selection including hard to find Trappist Ales and British Barley wines.
The Abbey now offers a wide assortment of micro-distilled fine spirits. To finish off this marriage of extraordinary beer and pub grub one can indulge in the Abbey’s vast selection of quality cigars and port wines.
When you visit Miami Beach, stop by the Abbey Brewing Company for good times, great beer and cheer.
Map & Directions
Drink and enjoy!