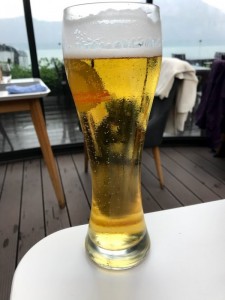 As the 500-year-old Mühlviertel tradition goes, on special occasions brewery workers would fill large buckets (Kübel) with beer directly from the fermentation tanks. They would then pass around this extremely fresh, unfiltered beer and drink from the Kübel in turn. Because none of the proteins, yeast, or hop essences had been filtered out, this beer was fuller and more aromatic than any other they served. For this exact reason, our former head brewer, Franz Krammer, took it upon himself to bring this age-old tradition back to life.

A heroic act of liberation

Unfortunately, this was easier said than done. At the time, our brewery had thousands of barrels of beer fermenting together in a very small area. Anyone brave enough to descend into the depths of fermentation room stood the risk of suffocating in a cloud of carbon dioxide before their Kübel of beer was full. Thankfully for Hofstetten, Franz Krammer was one of the fire brigade’s divers. Together with his colleagues, he set to the task of saving the beloved Kübelbier. Outfitted in full diving gear, air tank and all, the men each grabbed a Kübel and dove into the oxygen-less abyss of the Hofstetten fermentation cellar. 15 minutes later, our heroes resurfaced with the spoils of their victory sloshing in their hands. As the legend goes, the beer was then transported via police escort to a local celebration, where the attendees made quick work of the long-lost treasure.

The first Kübelbier to be bottled

From that point on, the town’s community couldn’t get enough. The Hofstetten “Beer Divers” were called on so often that Krammer never thought he would be able to take off his diving suit again. If he ever wanted to live a life above the surface again, he had to find a way to put this beer in a bottle. When he did, Hofstetten was the first brewery in Austria to professionally bottle and market a beer of this kind. From there, they just had to settle on a name. Zwickel or Kellerbier would have been accurate nomenclatures, but neither really seemed worthy of the beer’s unique backstory. Out of ideas, Krammer turned to the village elders, who all said the same thing: “We’ve been drinking our Kübelbier for as long as we can remember, and that’s what we want to have!” Since that time, our Original Hofstettner Kübelbier has been consumed with enthusiasm from all sorts of vessels, including, sometimes, a Kübel.

Our Kübelbier won first place at the Hallein Beer Festival in 2005 and 2008 and gold at the Austrian Culinarix in 2010.