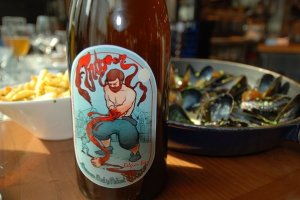 Tulipa
Visite o website
According to legend, a cruel giant named Druon Antigoon, who was so large that his legs straddled the banks of the Scheldt river in Antwerp, would stop boats entering the harbor and demand a toll. For those who refused, he severed one of their hands. One day a Roman soldier named Silvius Brabo cut off Antigoon’s hand and tossed it into the river. According to folklore this legend is the origin of the name Antwerp: “hand werpen” meaning “hand thrown.”

Pours a cloudy, dark golden yellow color with a two finger frothy white head that sticks around for a while, leaving massive amounts of lacing in its tracks.

The nose suggests a lot of what will come in the taste - nice bready/biscuit flavor, a bit of mellow funk from the yeast, sweet and malty balance, with earthy hop and a hint of fennel that round the flavor out nicely.

The mouthfeel is absolutely perfect - medium bodied with just the right amount of carbonation for the style, a clean dry finish with a bit of lingering bitterness from the hop
Tweet