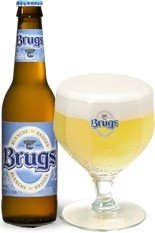 Copo ideal
Visite o website
Jan Hugheins of Bruges, the Venice of the North, set up his own brewery there in 1455. In 1587 the related 'T Hamerken inn opened its doors. These two events brought about an important evolution in the production of Brugs beer. Amidst the trading activities of the flourishing city the brewing traditions were passed on for centuries. The crisp Brugs white beer has its roots in the city of Bruges. White beers have a marked place in the beer culture. High-fermentation beers were the first beers to be brewed. Not until the 1920s did low-fermentation beers emerge. High-fermentation beers later became important again and in the 1980s white beer regained its former popularity. Brugs, a white beer with a past, is at the heart of the beer culture and tradition: it is an unfiltered, high-fermentation beer undergoing a second fermentation after bottling. This attractive product is positioned as an easy-to-drink beer and thirst quencher.

A light yellow beer, finely balanced between sour and sweet, fresh and fruity. Because it is not filtered after storage the beer has a natural opaqueness giving it its specific flavour. This white beer is brewed from pure wheat.
Alc. 4.8 % vol.

The specific flavour of wheat, joined with the powerful aromas of hops, orange rind and coriander give this white beer a rich and refreshing character.

Store the bottles in a cool place (2 to 4°C). It is advisable to store the bottles standing up.
Empty the full contents of the bottle into a degreased, rinsed and wet glass, making sure the bottle does not touch the foam.
Allow to overflow a little and remove excess foam.
Rinse the bottom of the glass, dip dry, and serve on an appropriate coaster accompanied by the bottle.
Brugs is an authentic Belgian white beer for sparkling and surprising people who like something different.