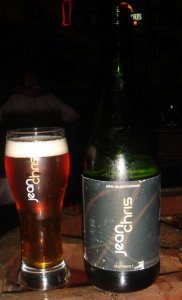 Born of a meeting between Jean Le Chocolatier and Mi-Orge Mi-Houblon, the JeanChris is a real beer, of affirmed character, refreshing yet complex. Brewed and crafted at the Brasserie Artisanale de Rulles, the JeanChris offers an amber-colored body, beautiful white foam, creamy and persistent, as well as a subtle bubbling. At the scent, fruity flavors immediately appear, showing the use of an original hop. The first sip directly reveals the uncompromising character of bitterness, followed by sweetness with biscuit tastes coming from a variety of malts used. In order to make a happy marriage between the flavors of beer and those of chocolate, we chose to create two pralines. The taster may, according to his wants and preferences, go in two directions: Sweetness…the roundness of the malt is accentuated by a praline garnish “almond - salt flower - praline” which forces the bitterness in the background, without making it disappear altogether, a sweeter match to discover this beer in the evening or after a meal. Intensity…the bitterness of the hop is heightened by a chocolate with Espelette spices, which, after tasting of the praline and a sip of beer, brings out the pugency of the spice and the bitterness of the JeanChris… a stronger match beautifully placed in the appetizer spirit of the beer. In order to fully express its aroma, the JeanChris ought to be stored in a dark cellar and tempered and refrigerated a couple of hours before consumption, standing straight, in order not to move the yeast present in the bottle. (Yeast from Orval.) Its chocolate garnishes ought to be stored at room temperature so as to best reveal its flavours. Enjoy!