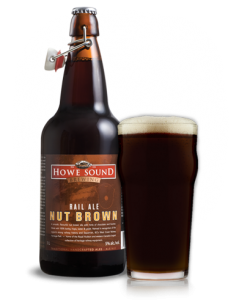 Food Pairing
This rich nut brown ale goes well with hearty fare such as hamburgers and sausages, and matches well with stews and smoked fish. The roasted malt finish makes it a nice accompaniment with many cheeses and desserts.

Our Bottle
This re-closable bottle, known as a “pot-stopper”, was widely used in Europe and North America prior to the 1950s. Our new combination cap is an innovative design that allows closure by both crown and swing caps. It can be re-used and meets our green packaging objectives.