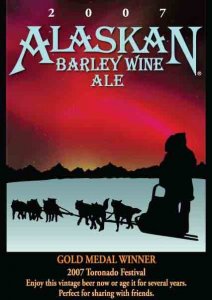 Conhaque
Visite o website
The Style
Originating in England in the 19th century, barley wine is a style of strong ale so named because many versions have a high alcohol content comparable to wines of the same era. American barley wines feature big malt character and high residual sweetness, counterbalanced by the generous addition of hops.

Flavor
Alaskan Barley Wine is a full bodied ale, deep mahogany in color and brewed with an array of complementing malts to achieve its high original gravity. Multiple hop additions in the boil and dry hopping during fermentation provide contrast to the big malt character resulting in the smooth balance that distinguishes this specialty brew. Like many fine wines, Alaskan Barley Wine may be aged in the bottle and gains deeper malt complexity and smoothness over time.

History
Alaskan Barley Wine has been produced in limited edition vintages each year since its introduction in 2003. A big beer for big winters, this brew has garnered a steady following in Alaska. Bottled for the first time in 2007, the balanced flavor collaboration between hops, malt and high alcohol showcases the barley wine style, winning first place at the 2007 Toronado Barley Wine Festival and bronze at the 2008 World Beer Cup.

Ingredients
Alaskan Barley Wine Ale is made from glacier-fed water, a generous blend of the finest Pacific Northwest hop varieties and premium two-row and specialty malts. Our water originates in the 1,500 square-mile Juneau Ice Field and from more than 90 inches of rainfall each year.

Recommendations
Alaskan Barley Wine is best if served at warmer temperatures, approximately 45 to 50 degrees. While impressive on its own, the richly complex flavor is enhanced when paired with desserts, strong cheeses and hearty, flavorful stews.