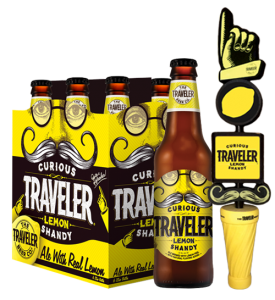 Copo ideal
Visite o website
Driven by wanderlust and a desire for discovery, the Curious Traveler™ set out to explore the globe. Always fearlessly inquisitive, he relished opportunities to befriend other travelers and to experience cultures he had only previously imagined. He sampled their wares, their foods and most importantly their libations. Some were good. Some not so good. Others were downright dangerous.

Many years into his travels, his pace slowed on a particularly sweltering day. He sought refuge in a small pub to escape the oppressive heat. Before he could even finish wiping his brow, the bartender handed him a glistening glass of ale. The Traveler took a liking to the invigorating lemon shandy concoction. “Quite a refresher!” he said gratefully.

The Traveler has never stopped exploring – in fact, he’s on the road this very day. Somewhere. Only one thing has changed: he now makes sure he orders a shandy everywhere he goes.

We proudly introduce our flagship Shandy, the CURIOUS TRAVELER™.

Curious Traveler is an American craft wheat ale brewed with fresh lemon and a touch of lime, delivering a crisp, light-bodied flavor with a juicy citrus aroma.