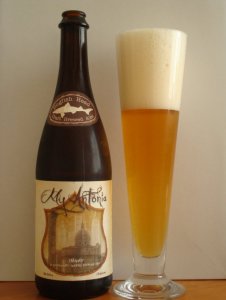 My Antonia started out as a Collaboration beer when Sam brewed it at Birra del Borgo (hope you can read Italian) outside Rome, Italy with owner/brewer Leonardo DiVencenzo in October of 2008. In 2010, we began brewing My Antonia here at Dogfish Head brewery in Delaware for U.S. distribution. My Antonia (named after the Willa Cather read), is a continually-hopped imperial pilsner. This original 2008 batch was brewed and distributed by Birra del Borgo. A small quantity was sent over to the United States. The 2010 release will go to limited markets here in the U.S.. It should start hitting the shelves by mid-late June.