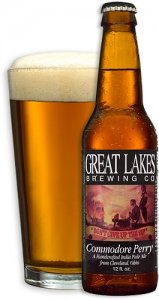 Caldereta
Visite o website
Name Origin:
Named for the naval officer and War of 1812 hero who battled the British enemy on Lake Erie, our Commodore Perry India Pale Ale
has a pretty dry sense of humor. He likes to answer your question with another question. He loves trivia but refuses to participate on your pub quiz team. He would watch reality TV just to make fun of it, but he doesn’t own a TV. He’s definitely a cat person. But underneath this edgy exterior, there’s a sweeter side. If you’re bold enough to drink him, you’ll instantly earn his respect. And when you’re dealing with the Commodore, respect means a lot.

Style Origin:
The Bow Brewery in London exported this particular version of pale ale to the multitude of British soldiers, colonial administrators, and settlers in India. Its high potency and high level of attenuation reduced chances for spoilage and made it a strong candidate for shipping.

Flavor:
Medium-bodied and well-hopped with a dry, fruity finish

João Leonardo Pires Carvalho Faria
"No aroma, a primeira sensação é a do fruto do..."