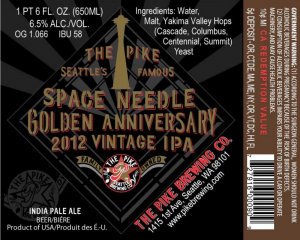 Copo ideal
Visite o website
Brewed in commemoration of the 50th anniversary of the Space Needle.


April 2012 marked 50 years since that icon of the future, The Seattle Space Needle, debuted.

When the Space Needle announced a competition among local brewers to determine who could brew the best beer to commemorate their anniversary, our brew crew went to work on something really special, a vintage dated golden IPA.

100 journalists, and other local dignitaries and beer enthusiasts were invited to the Needle for the delicious competition which included specialties from the menu of Sky City, the famous Space Needle revolving restaurant. Ten local brewers competed, and, to make a tall story short, Pike 2012 Space Needle Golden IPA was voted the champion.

Limited quantities of Pike Space Needle IPA will be available at the Space Needle, at The Pike Pub, and at pubs, restaurants, and stores throughout the city. When you drink it you'll realize, the future is now!