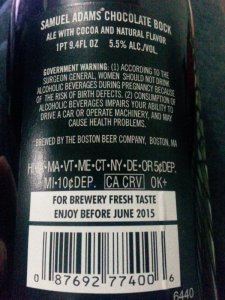 Tulipa
Visite o website
To create this rich and creamy brew we wanted to go beyond dark roasted “chocolate” malt and age the beer on a bed of cocoa nibs. For this year's brew we used a blend of cocoa nibs from TCHO®, an artisanal chocolate maker in San Francisco. These cocoa nibs, the primary ingredient in chocolate, are harvested in Ecuador and known for their quality and flavor. They impart complex aromas and flavors from chocolaty to fruity, nutty, earthy, and citrusy.

We started with hand selected Tettnang Tettnanger and Spalt Spalter Noble hops from Bavaria and combined them with a selection of carefully roasted malts including a blend of two-row pale malts, Munich 10 and Caramel 60.
We develop the flavor and aroma of chocolate by aging the beer on a bed of rare dark cocoa nibs. . As the beer matures, the flavors are released into the beer giving it a complex, full bodied taste and velvety finish. A hint of vanilla is added, also used in making chocolate, to meld the combination of flavors together. The chocolate combines with the deep roastiness of specialty malts and a subtle hop character for a rich, decadent, and wonderfully smooth brew.
Beer and chocolate have a much more complicated history than most people realize. In fact, recently it was discovered that the origins of chocolate stem from a brewing process. Mesoamericans, who flourished in Central America before it was colonized by the Spanish, developed chocolate as a by-product of fermenting cacao fruit to make a beer-like drink called chicha still brewed by South American tribal people