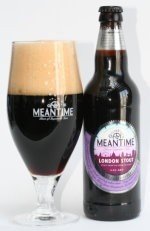 'A Stout' originally just meant a strong beer, so in theory you could have a Stout Pilsner or a Stout Pale Ale. In practice it was applied to the Porter style, so therefore meant a stronger Porter. As the porter style declined in England in survived in Ireland and Stout Porter became abbreviated to just Stout, and, as is the way with beer styles the strengths gradually declined. With the modern revival in interest in Porter the consequence is that Stouts are now lower in alcohol than today's Porters. Now associated with Ireland, Stout is, as the son of Porter, a London drink although the Irish version has diverged suggiciently from the original to warrant being judged a style of its own. Meantime London Stout is made in the original London way, with an 100% malt grist including the original brown malt and no roast barley. This gives the beer a more velvet mouthfeel and greater vanilla notes than Irish alternatives. It also pours without making you wait. Available in 500ml bottles and 30l keg.