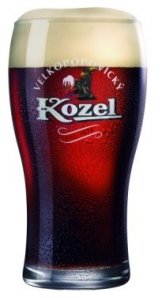 Velkopopovický Kozel is a Czech lager produced since 1874[1]. In that year, Franz Ringhoffer founded a brewery in Velké Popovice (Großpopowitz) near Prague. Their symbol is a goat (Kozel, „Großpopowitzer Ziegenbock“). In 1995, the company was purchased by the Radegast Brewery, which merged with the Plzeňský Prazdroj, a. s. Brewery in 1999, only to be purchased by SABMiller the same year. Within the Czech Republic, Kozel is available as a Pale, a Medium, a Premium, and a Dark beer. Production has been licensed in Russia, Israel, Hungary, Ukraine and Slovakia, making Kozel the most popular Czech Beer outside the Czech Republic.