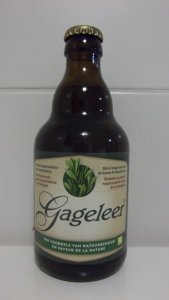 Copo ideal
Visite o website
Gageleer is a pure-malt ale from the Belgian Campine (Kempen) region. It draws its characteristic aroma from bog myrtle (Myrica gale), a small shrub native to the peaty nature reserves of the Campine. This herb, also known as sweet gale, was once the primary flavoring in medieval gruit ale. Gageleer is the first modern beer to once again use gale. Gageleer is marketed by a co-operative of the same name, with all profits going towards nature preservation.

Age-old gruit ale
Gageleer is the first modern Belgian beer to trace its roots back to the historical gruit ales or “herb beers”. During the middle ages, beer was healthier than water – the water used for brewing had at least been boiled – and was flavored with a mixture of herbs found in the area, called gruit or gruyt. The main ingredient of this mixture was always bog myrtle (Dutch: gagel), which gave the beer both its bitterness and a longer shelf life.

Today, little is known about the use of gruit. It was certainly an important commodity, and taxed accordingly. The well-known Gruuthuse family from Bruges owed their fortune to it.

It was in Germany that gruit first faced competition from hops. Originally used as medicinal herbs, hops also slowly gained popularity amongst brewers. The Bavarian Reinheitsgebot (purity law) of 1516, which decreed that beer was to be brewed only from water, barley and hops, was the final nail in the coffin for the gruit ales – until the advent of Gageleer.

Gageleer: out-of-the-ordinary beer
Gageleer is a pure-malt ale with 7.5% ABV. No sugar is added to increase the alcohol content. Bog myrtle from the Campine region’s nature reserves gives Gageleer its unique taste, creating a singular beer that has carved out its own space in the Belgian beer landscape.

Appearance
Gageleer is a golden, almost dark-blonde ale. For the clearest pour, leave the last centimeter (the yeast deposit) in the bottle.

Nose
The smell of Gageleer is a striking oddity in the contemporary beer landscape. It surprises with notes that are hard to pin down and might even be described as exotic. The precise sensation depends for a large part on one’s own experience of taste and smell. Descriptions range from the smell of resin or that of the heath, honey and fruit or Mediterranean scents like laurel, aniseed and mint, to that of pepper, ginger, liquorice and even eucalyptus. While this last note is highly unconventional in a beer, many tasters consider it an apt comparison.

Taste
Gageleer’s taste is characterized by a full mouthfeel, with no stickiness. Fermentation is exceptionally profound. The initial taste is sweet, due in part to the 7.5% alcohol, as well as fruity and spicy with traces of pepper and liquorice. The intense mouthfeel is followed by an uncommon bitterness. Its distinctive taste and bitterness make this a surprisingly refreshing beer despite the higher alcohol content.

Tasting beer
Gageleer has expanded the boundaries the Belgian beer landscape. Its unusual spiciness grants it a special position amongst both the Belgian and international modern beers. Gageleer is the perfect tasting beer.

Storage
Gageleer is a natural product. As with any beer, store it in a cool, dark place at a constant temperature. A cellar or cool pantry is ideal. Sunlight and high temperatures will change the taste of beer, which is why beer bottles usually have a dark brown color.

Gageleer is a top-fermented ale, and will keep for 2 years under the right conditions. It will not spoil if kept for longer, but the taste will change.

Bottles of Gageleer must be stored upright.

Serving
Gageleer is best served at 4 – 6 ºC in its own type of glass. Ensure that the glass is clean: degrease it with a good detergent, rinse with clear water, and dry with a clean, lint-free cloth.

Hold the glass at a slight angle while pouring, allowing the beer to run down the inside of the glass without glugging. When the glass is almost full, turn it upright. This will result in a pleasing head of foam up to several centimeters high.

Bottle-conditioned ales can be served with or without the yeast – this is a matter of personal taste.

Gageleer is brewed at the “Proef Brewery” in Lochristi, near Ghent, Belgium, from a recipe from and on behalf of Gageleer cvba-so.