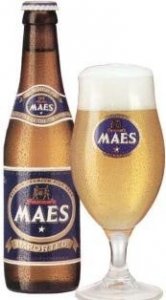 In 1880, when Egied Maes revived the small Sint-Michaël brewery in Waarloos he had great ambitions. In 1901 Egied Maes turned the running of the brewery over to his sons, Ferdinand and Theophiel. They introduced modern machinery: from then on a steam engine was to drive the millstones in the milling shop and the stirring paddles in the vats. The business was renamed 'the St-Michaël Maes Brothers Steam Brewery and Malt House'. The two brothers perfectly anticipated the market demand for low-fermentation beers. They launched their first lager in the 1920s. In 1926 the third Maes generation entered the business. They made significant investments to build a first-class brewery hall. Their investment soon bore fruit. At the 1930 world exhibition in Antwerp the Maes brewery successfully launched its Prima Maezen Beer. This beer was perfected by the next generations, who contributed a wealth of expertise. They laid the foundations for the lager beer now being sold as Maes. Exceptional care goes into the brewing of Maes. Only the very best lager is good enough to display the Maes brand, so the production method satisfies the strictest quality standards. Maes is a golden lager beer, it has a fruity, clean and light flavour with a pleasant hint of bitterness.