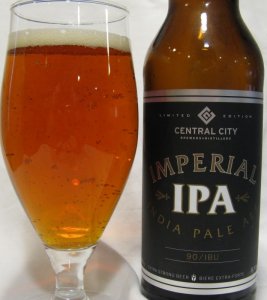 We are very excited to be releasing some new beers at the pub this week. Namely, our Red Racer Imperial IPA and single-hop Red Racer Falconer’s Flight IPA. Brewmaster Gary Lohin has written a note to let you know what you can expect from these latest releases: “We are releasing our Imperial IPA this Friday at our brewpub. 9.0% alc/vol, dry-hopped in the fermenter, and then a second time in the serving tank. I’m pretty excited about this beer as we have given it the proper aging time needed, 12 weeks. It was really tasty when I tried it last Friday. On Saturday, February 26th 2011 at 4:00pm we will tap a cask of this Imperial IPA for our second cask night here at Central City. This one off was dry-hopped again for a 3rd time in the cask. In addition to that our Falconer’s Flight IPA is on tap in the pub right now. I find the beer a little “softer edged” than my regular IPA, but still delicious. No doubt the use of some more herbal-type hops within the nine variety Falconer’s Flight pellet makes it unique. It’s nice having to try something different that we may never see again.” The last time Gary made an Imperial IPA it was voted the best in Canada at the 2010 Canadian Brewing Awards. If you plan on attending our second cask night on the 26th, please make sure to arrive early as the last time we tapped a cask it ran dry in just under an hour. The cask will be tapped at 4:00pm, and our usual Live Music Saturday’s will take place after the Canucks vs Bruins game.