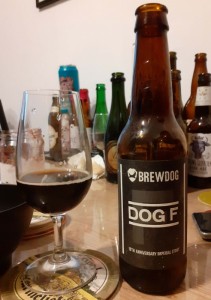 Tulipa
Tenth Anniversary Imperial Stout brewed with Habanero chilies, cacao nibs and coffee, aged in Cognac barrels, Dog F is the latest incarnation of an anniversary beer style that started out with Abstrakt 04.
ike Dogs A-E before it we brewed a deeply redolent imperial stout with a series of speciality ingredients, and then barrel-aged it. But unlike its predecessors we have given the beer a monumental new dimension by ageing it in Cognac barrels (well, it is a celebration). It is the perfect beer to denote a Decade of Dog – ten years of BrewDog.