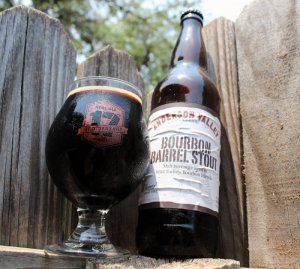 Copo ideal
Visite o website
Aged for three months in Wild Turkey® Bourbon barrels, this luxurious stout has a deep ebony hue and a beautiful mahogany head. The woody, vanilla-like notes imparted by the barrels mingle with aromas of fresh baked bread, toffee, and espresso and envelop the rich chocolate and roasted barley flavors with a fine bourbon character.
Our exclusive partnership with Wild Turkey® gives us a world class, consistent source of barrelage, allowing our brewers to explore new frontiers in barrel-aged craft beer. Since its introduction, Wild Turkey® has maintained a distinctive distillation and aging process that gives it a smooth taste and a lingering flavor. They also use differentiated process whereby the bourbon is distilled at a low proof to seal in its flavors. Very little water is added to the bourbon, resulting in a full-flavored authentic taste similar to what one would get straight out of the barrel. Wild Turkey is a genuine drink with a sought after “burn” that comes from its high proof, an attribute fundamental to the brand and critical in maintaining its authentic bourbon characteristics.