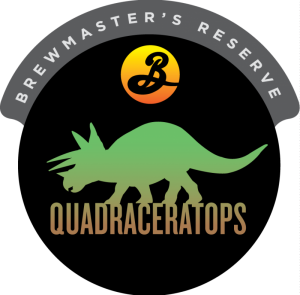 Copo ideal
Visite o website
We thought it was a rock. The strangely smooth stone protruding from the Eastern brewhouse wall had been a well-loved curiousity...until Lead Cellarman Rob Lemery was moving equipment one day and knocked it into a pool of draining wort. Laughing, we put it on top of a control panel where everyone could admire "Rob's Egg."
The next morning, the joke was on us - "Rob's Egg" had hatched! Worthington's Compleat Field Guide to Unlikely Creatures revealed the truth: our "rock" had hatched a Quadraceratops. Last seen wandering the ruins of Belgian abbeys in the early 1200s, the beast stood 21 hands high at the shoulder, sporting four massive horns, surprising speed, and a playful but unpredictable disposition. Fed on an expensive diet of European malt and candi sugar, the Quadraceratops quickly threatened to outgrow the confines of the brewhouse before we could release him into the wilds of Belgium. One day we came in to find that he had started up the brewing system, somehow mashing in a strong wort of the same malt and dark candi sugar he'd been raised on. He dipped one of his horns into the wort to impart a magical yeast. Then he bowed all four horns in our direction, and before we could flee, turned and burst out through the Eastern wall onto the dawn streets of Brooklyn.
Our insurance company is dubious and displeased. We could not be happier. The Brooklyn Quadraceratops is a strong dark abbey ale in the Quadruppel style, complex and fruity without being overwhelming. It's brilliant with cheeses, works wonders with game meats, and is a revelation with steaks. If you spot the Quadraceratops, approach him with caution. He's a friendly beast, but still a beast.
Style: Quadruppel
Malts: Pilsner, Abbey, Special B
Additions: Belgian Dark Candi Sugar
Hops: Perle, Golding, Aurora
Yeast: Our House Belgian Yeast Strain
Alcohol by Volume: 9.9%
Original Gravity: 21° Plato
Food Pairings: Steaks, roast meat, game meats, and strong cheeses.
Availability: Very Limited Release
Format: Draft only