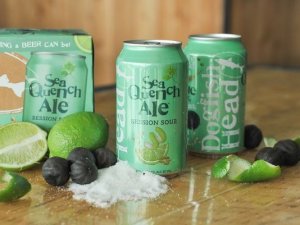 Tulipa
Visite o website
SeaQuench Ale is a session sour mash-up of a crisp Kolsch, a salty Gose, and a tart Berliner Weiss brewed in sequence with black limes, sour lime juice and sea salt to make this the most thirst-quenching beer Dogfish Head has ever brewed.

“…may be the world’s most thirst-slaying beer.” - Men’s Health

When we opened our geographically-enamored seafood restaurant Chesapeake & Maine in 2016, we wanted to honor its coastal roots by developing this sessionable, seafood-pairing beer that takes you to a place of briny seawater on sunny beach days. Our experimentation focused on three thirst-quenching styles with German roots, but no single style quite hit the mark and mood we were going for … so we blended them and the result was the tart and refreshing beer we were looking for!

Partnering with the National Aquarium, we replicated sea salt sourced from the mouth of the Chesapeake Bay and added sea salt from the coast of Maine to honor the Atlantic coast we love so much.