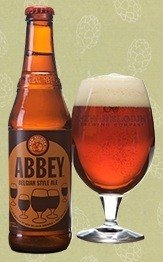 Winner of four World Beer Cup medals and eight medals at the Great American Beer Fest, Abbey Belgian Ale is the Mark Spitz of New Belgium s lineup - but it didn't start out that way. When Jeff and Kim first sampled the beer at the Lyons Folks Fest, reviews were mixed at best. One of founder Jeff s first two Belgian style homebrews (along with Fat Tire), Abbey is a Belgian dubbel (or double) brewed with six different malts and an authentic Belgian yeast strain. Abbey is bottle-conditioned, weighs in at 7.0% alcohol by volume, and pairs well with chocolate (or boldly served by itself) for dessert.

The Man Behind Berlin
3.5