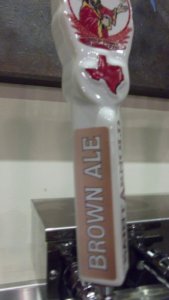 Pint
Visite o website
At Saint Arnold, we are passionate about animal rescue. A number of us here are proud to have rescue animals as family members. To this end, we are donating a portion of the sales of Ale Wagger to support local rescue organizations to improve the lives of animals in our communities.

A beautiful, deep copper brown ale. It has a full, malty body with hints of chocolate, a touch of sweetness and a light hop flavor. A complex malt character is created by combining five different types of malts. It has a rich, creamy head with a fine lace. The light fruitiness, characteristic of ales, is derived from a proprietary yeast strain.


Ingredients:
Malted Barley:
We use five different types of malted barley in Ale Wagger. No other grains or cereals such as corn or rice are used. The combination of malts creates a balance between malty sweetness, chocolate roastiness, and alcohol.

Hops:
We use three different Pacific Northwest hop varieties in Ale Wagger. The resulting hop character is a very light and pleasant bitterness with a subtle hop flavor and aroma.

History and Trivia:
Debuted June 1995 as the original Brown Ale.
Debuted September 2014 as Ale Wagger Brown.
Our original Brown Ale was released in celebration of our one-year anniversary.
Developing the original Brown Ale recipe proved quite tricky, especially in achieving the nice chocolate character without it becoming overly roasty. Perfection was discovered in using one-half percent of the total grain bill being chocolate malt. This means that out of 2,000 lbs of malt, only 10 lbs are chocolate malt. Using 15 lbs would create a dramatically different flavor.
This is one of our favorite beers for pairing with food. The most memorable pairing with this beer was a sauteed pecan crusted red snapper with white wine butter sauce and tiny green beans at a beer dinner we did in 1995. It was unexpected that such a rich, chocolatey beer would pair so well with a light fish dish. The key to the pairing was the nuts which brought out the nutty malt character in the beer.
If Ale Wagger is your favorite, don't worry--it's not going anywhere. (It's also our owner's wife's favorite beer!)