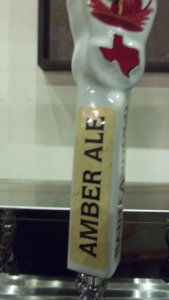 Pint
Visite o website
A well balanced, full flavored, amber ale. It has a rich, malty body with a pleasant caramel character derived from a specialty Caravienne malt. A complex hop aroma, with a hint of floral and citrus comes from a combination of Cascades and Liberty hops. It has a rich, creamy head with a fine lace. The light fruitiness, characteristic of ales, is derived from a proprietary yeast strain.


History and Trivia:
Debuted June 1994.
Saint Arnold Amber Ale is our flagship product and our first official brew.
When asked how many test batches were brewed in creating the Amber recipe, Brock Wagner quickly replies, "Six."
We have heard rumors that we've changed the Amber Ale recipe. While we did tweak the recipe a little bit during the beer's first three months, it hasn't changed since then. Which means we're still brewing the same Amber Ale recipe we brewed at the end of 1994!
Saint Arnold Amber is the movie star of the bunch. If you look for it, you can spot the Amber tap handle in the movie Miss Congeniality. (The location is supposed to be a bar in San Francisco but it's actually the Dog and Duck Pub in Austin!) Also, in The Evening Star, you can spot Juliette Lewis' character's boyfriend in a Saint Arnold front-logo t-shirt. Later in the movie you can spot the characters drinking Amber Ale at the Pig Stand.
When our first production batch of Amber Ale was released, we discovered that we had inadvertently brewed an IPA. While quite tasty for an IPA, it wasn't what was intended and we noticed all the non-hopheads (the majority of people) at the opening party making funny faces. There were 17 people in Houston who loved it and they complained bitterly when we corrected the recipe.