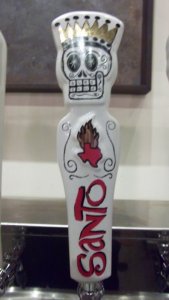 Cilíndrico
Visite o website
Santo is a black Kölsch, which technically doesn’t exist as a style, but this is as close as we can come to describing it. Essentially it is brewed using a Kölsch recipe with the addition of Munich and black malt. It is light bodied and floral yet with a distinct dark malt flavor. Our goal was to create a dark yet refreshing beer that would pair perfectly with a plate of enchiladas.

The label artwork is by Houston artist Carlos Hernandez who is known for his Day of the Dead Rock Star series of paintings and prints.


History and Trivia:
Debuted October 2011.
This beer has been about five years in the making and started as a project to rename Brown Ale. We asked Texas artist Carlos Hernandez, known for his Day of the Dead Rock Star paintings, to do his interpretation of St. Arnold. It morphed into what is now the Santo label. We loved the artwork, but it also made us decide to come up with a new beer to match the artwork. This is backwards from how we normally work. Between many test brews, going down a couple different style paths, building the newery and moving equipment, the process ended up taking several years. We couldn’t be more pleased with the results though. It has become the favorite post-shift beer for our brew crew. What – you don’t have post-shift beers at your place of work?