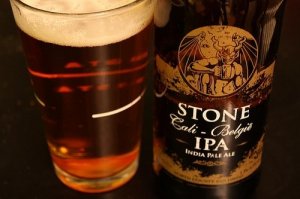 When reading the name "Stone Cali-Belgique IPA", "Cali" hints that it is a California-style IPA, and this brew has an undeniable Belgian influence, indicated by the word "Belgique" (which is how Belgium's French-speaking population says the word "Belgian"; the Dutch-speaking Belgians say "België"). We carefully selected a Belgian yeast strain that illuminates a fascinating new aspect of the beer that is otherwise quite simply Stone IPA. The result is both completely new and different, while still being recognizable as a Stone brew—and Stone IPA in particular. Think of it as an otherwise identical twin to Stone IPA that was raised in a Belgian culture. Literally.