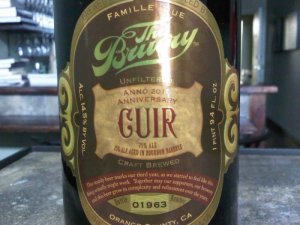 Cuir is our third anniversary ale. It is the same recipe as Papier, but again created using the Solera method. Each year we will continue to blend old barrels of anniversary ale with a new batch of the same beer, adding an additional layer of complexity that will grow over time as we continue to age and blend with each anniversary, creating an older average age to the ale.