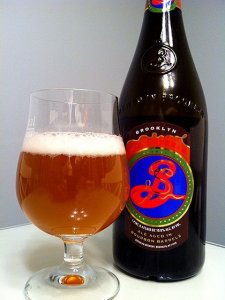 Copo ideal
Visite o website
There was a time when all beers were aged in wood, and yeasts ran wild and cavorted together. Modern brewing is wonderful, of course, but sometimes a little cavorting is a fine thing. Sometimes it gives you a chance to reveal your funky side. We have to admit it - we’ve been cavorting for years...and sorta holding out on you. We didn’t want to do that, but the fact is that up until now we only had enough room to make this beer for ourselves and some close friends - we didn’t have enough beer to put it out on shelves. We actually make a lot of beers like this - we call them the “Ghost Bottles”, and we’ve enjoyed pouring them for you at tastings and dinners.
Now we’re very pleased to finally give one of our “ghosts” the opportunity to materialize in your hands. Brooklyn Wild Streak starts off as a Belgian-inspired golden ale. After fermentation and a brief conditioning, we then age the beer for several months in second-use bourbon barrels, giving it a soft, round character infused with nicely balanced oak flavors. Finally we bottle the beer flat and re-ferment it with blend of priming sugar, Champagne yeast and the wild yeast strain Brettanomyces. As the two yeasts do their cavorting, the beer gains its natural carbonation. The “Brett” takes many months to do its thing during bottle aging, but once it does, Wild Streak is enlivened by a wonderfully complex earthy funk.
This beer is almost one year old when released, but it will age beautifully for many more. It’s particularly great with washed rind cheeses, game meats, steaks, and a few more things we probably shouldn’t mention here. You’ll figure it out for yourself, and that’s half the fun. So go ahead - unwind that cage, pop that cork, and reveal your Wild Streak. You know you want to.
Style: Belgian-style Strong Golden Ale Aged in Bourbon Barrels and Bottled with Brettanomyces
Malts: German pilsner
Additions: Second-use American Bourbon Oak
Hops: German Perle, Slovenian Aurora, Styrian Golding Celeia
Yeast: Brooklyn house “Belgian” strain, Pris de Mousse Champagne, Brettanomyces Lambicus
Alcohol by Volume: 10%
Original Gravity: 18.5° Plato
Availability: Q1 2014
Format: 12/25.4oz (750mL) cork finished bottles