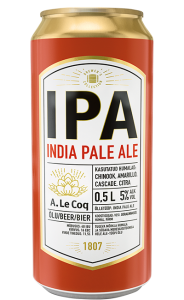 Pint
Visite o website
IPA, or India Pale Ale was born in England in the 18th century when there was a need to send beer to British soldiers in India. The beer that was produced in Britain in those days would not have survived a six-month journey from Britain to India, so a special strong, heavily hopped beer was created. A. Le Coq IPA is a pale ale with strong hoppy flavour that has been brewed with Chinook, Amarillo, Cascade and Citra hops that add bitterness to the beer.