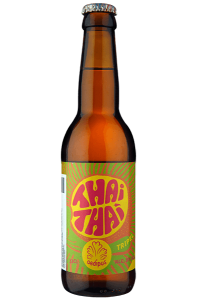 Thai Thai is the culmination of experimental efforts in our very early days. It’s a real home brewing fairytale, complete with four hard working dwarves, a magic potion and a beautiful princess.

Back in the days of kitchen-brewing, we were mostly creating dry, hoppy beers. Until one day, Paul’s girlfriend, who was not a ‘hophead’ like us, suggested we’d make her something that she liked. When it comes to brewing a beer with unexpected ingredients, we’ll try anything once. So at her suggestion, we decided to go for a sweet, spicy beer using ginger.

Sweet and spicy are a winning combination in Thai cuisine, that we knew. So one trip to the local market in Amsterdam’s Chinatown gave us all the sensory inspiration we needed. Initially there to buy ginger, we ended up buying everything but. Our basket filled up with things that smelled nice and looked pretty, like striking red chili peppers, coriander, pungent lemongrass, oranges and galangal root. (fair enough, ginger’s silly cousin).

Because we use Belgian Abbey yeast strain, with this beer we approach the Belgian beer tradition of the Tripel. But of course, we tried to twist the rules a little and expand the boundaries of the tradition. Of course our starting point was a basic Belgian Tripel recipe, where yeast contributes a fruity flavor. We added Pilsner malts and some American hop varieties at the end of the boil to enhance the citrus flavors. But then we added galangal root, lemongrass, coriander, chili pepper and orange peel and it turned into more than a Belgian Tripel, and became an exciting, spicy Thai dish trapped in a beer!

It’s a real adventure to taste – it’s familiar, yet surprising, and complex, yet inviting. Expect the unexpected. Power to the herbs!