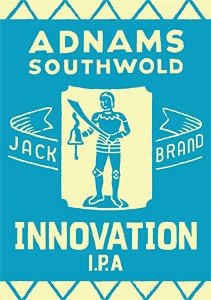 Copo ideal
Visite o website
Originally brewed as a one off to celebrate the opening of our new brewhouse and our new distribution centre, we have decided to repeat the beer again in 2009. It came first in its class at the 2008 World beer awards and has also won a Gold medal at the 2008 BBI (British Bottlers Institute) awards. The beer was created under the direction of our Chairman, Jonathan Adnams, whose instruction was to ‘Brew something to wow me’. The beer, our version of an American IPA, is brewed with a blend of Wheat and Pale ale malts to give a spicy, biscuity undertone to the beer, but it is in the hops where the beer really shines. A blend of hops from England, Slovenia and America (namely Boadicea, Columbus and Stryian Goldings) combine to give a wonderful grapefruit and tropical fruit aroma and bitterness that is balanced by the sweetness of the barley.

The hops in Innovation are the stars of the show. We used Boadicea, Columbus and Styrian Goldings to create punchy grapefruit flavours and aromas of tropical fruits. These are backed up by wheat and pale ale malted barley which add spicy, biscuit flavours and a slight touch of sweetness. The outcome is a wonderfully moreish IPA, packed full of flavour. Silver Medal Winner - The Stockholm Beer Festival 2013. (Contains barley & wheat).
- See more at: http://cellarandkitchen.adnams.co.uk/catalog/product/bottles/adnams-jack-brand-innovation-12-x-330ml-bottles-67-abv#sthash.8fSJ0LRI.dpuf