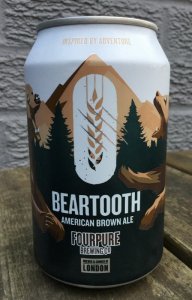 Pint
Visite o website
Beartooth is an easy drinking, full flavoured American Brown Ale. We use four different malts to deliver a beer of considerable complexity, with flavours of caramel, chocolate, and coffee. We use two American hop varieties to complement the malt character with bright, citrusy notes.

Inspired by a journey from Scotland, via London to the vast American centre, our take on the modern Brown Ale supersedes Britain’s working class pubs and embraces the US Hinterland. We wanted something so robust it would do the early adventurers proud, something that wouldn't be out of place after a tough day shovelling coal on a train headed West. Yet it's a complex beer and embraces today's modern adventurer, someone who isn't afraid to keep their beard trim or moustache waxed. Stick a few cans of Beartooth in your rucksack and you're prepared for any adventure that might come your way.