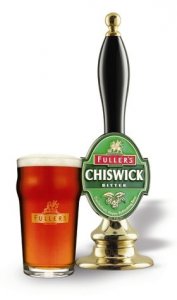 Chiswick Bitter is Fuller's popular session strength ale, which derives its name from the area of London where Fuller's is based. This lower strength beer is held in high regard across the South East of England and, like its stablemates London Pride and ESB, has won the prestigious CAMRA Great British Beer Festival, Beer of the Year award, in 1989. In fact, Fuller's is the only brewery in England whose top three brands have won this award: a fitting testament to the skill and dedication of the Fuller's brewers! Tasting notes At 3.5% ABV in cask, this brew boasts a refreshing, highly drinkable flavour, flowery and fresh, with very well developed hop characteristics (a mixture of the Northdown and Challenger varieties). In 1999, the brewing team at Fuller's, adhering strictly to Chiswick's closely guarded recipe, further refined the brewing process, so that the beer settles more compactly resulting in a more consistent and better tasting beer which is cleaner and fresher. As any Chiswick fan will tell you, the dry hopping (with Goldings hops) really sings out!