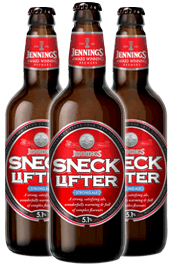 An award winning beer, a strong, satisfying ale, wonderfully warming and full of complex flavours, which create an intriguing beer of great character. This dark beer with a reddish tinge, derived from the use of coloured malts, perfectly balanced with specially formulated brewing sugars and English aromatic hops. First introduced in 1990 as a winter warmer, Jennings Sneck Lifter has become a firm favourite in the portfolio. In northern dialect sneck means door latch and a sneck lifter was a man’s last sixpence which enabled him to lift the latch of a pub door and buy himself a pint, hoping to meet friends there who might treat him to one or two more. Sneck Lifter has won Bronze award in the International Cask Ale competition at the Brewing Industry International Awards 2011. It was in the class 4 for cask ale 4.9% - 6.9% ABV Receiving a Bronze at the 2005 Brewing Industry International Awards held in Munich. A gold award was received in 2009 and a bronze award in this years International Beer Challenge.