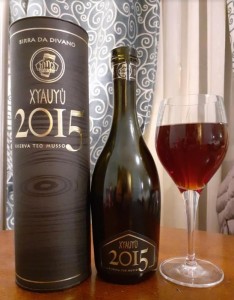 A flat, clear beer with no head. Technically, a barley wine with an intense ruby color. It releases wonderful scents of nougat, caramel, dates and dry plums.

In the mouth, the warm and dense sensations of caramel are amplified and accompanied by hints of nougat and dates, while the finish is reminiscent of cotton candy or fudge.

Everything started in 2004 from one of Teos’ visions: turning one of the typical flaws of beers - oxidation - into a strength. Long years of experimentations and tests culminating in the creation of a unique barley wine: Xyauyù. A peculiar name, that is difficult to forget, and comes from the innocent imagination of Wayan - Teo’s second child, who was three at the time - and the name of her imaginary daughter: Xyauyù.

Since its creation, Xyauyù has won everyone over. Its success has been acknowledged by several awards and victories. So it’s no surprise that master Teo has decided to grow the family of these barley wines with new, unprecedented versions. Xyauyù soon became tree: Oro, Argento and Rame. Only the Oro version has survived, along with several special editions: Barrel, aged in rum barrels; Fumè, aged in scottish whisky barrels; Kentucky, with the infusion of strong Italian cigar and Kioke, aged in traditional Japanese barrels used to ferment soy sauce.