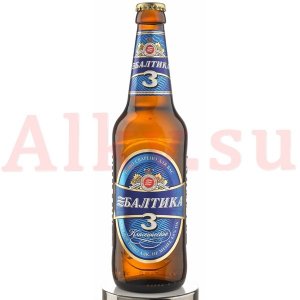 The Baltika №3 Classic beer was first launched in 1992 and has been traditionally the most popular beer among Russian consumers since the mid-90ies due to its invariably high quality. The year of 2004 witnessed a "new birth" of the Baltika №3: the glass bottle received a new shape and label, which was accompanied by the first canning of the brand. In May 2006 the Baltika №3 was produced in an innovative package: a premium 1 liter PET-package that looks practically the same as the half-liter glass bottle. In 2007 the Baltika №3 bottle received an embossed lettering. At the same time the brand was produced in a one-liter aluminum can that was new for the market. In April 2008 a 1.5-liter PET bottle with a "football" design was produced for the Baltika №3, especially for the Russian Football Championship. The PET-glass material has high protective qualities and keeps the most popular Russian beer fresh for a longer period. Due to the high demand the production of this popular brand keeps growing. By the results of the 2008, the volume of sales amounted +7,5% (Business Analytica) , which allows the brand to remain a certain leader in the medium-price segment. The highest distribution level of Baltika Company for food products (98%) makes the Baltika №3 available for buyers all over the country. Today the Classic beer is exported to over 40 countries around the world, including Germany, Japan, Great Britain, the United Arab Emirates, Greece, France, and Ireland. For ten years running the Baltika №3 Classic has received the prestigious Russian "Commodity of the Year" prize in the field of consumer goods. The prize is awarded to the most popular mass consumption products available in the assortment of retail shops. Since the time the prize was established the Baltika №3 Classic has been the unconditional leader in the "beer" category. This beer brand is also annually declared "The Most People’s Brand" by the results of tasting at the Moscow Beer Festival, the largest beer festival in Russia. In 2008 the Baltika №3 won a silver medal at the Superior Taste Award contest in Brussels established by the International Taste and Quality Institute. The Baltika Three has altogether over 30 awards of international and national contests.