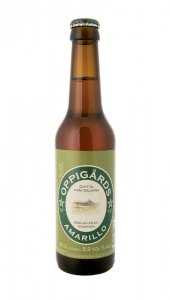 Copo ideal
Visite o website
This beer was brewed for the first time in 2009 to celebrate that we were inside our seventh year of operation. The beer was so successful that it was purchased by Systembolaget under the name Amarillo Spring. The success continued and we decided to brew this beer year round. The beer seasoned only with a variety of hops - Amarillo. We also dry hopped with amarillo. Smell and taste are more than berry fruity citrus fruity that result with many other American hop varieties. Beer's alcohol (5.9%) and residual sweetness carries clearly hops flavors. The color is copper-colored and also contains about 15 percent wheat malt. Bitterness is quite high but right for the type of beer is an American pale ale.