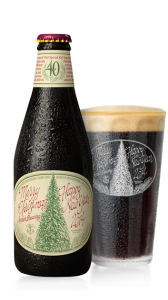 Pint
Visite o website
This is the fortieth annual Christmas Ale from the Anchor brewers. It is sold only from early November to mid–January. The Ale's recipe is different every year, as is the tree on the label, but the intent with which we offer it remains the same: joy and celebration of the newness of life.

Our tree for 2014 is the Giant Sequoia. It was hand-drawn by James Stitt—who has been creating Christmas Ale labels for us since 1975—to look as a "Big Tree" planted in 1975 might look today.

"The Big Tree is Nature's forest masterpiece, and…keeps its youth far longer than any of its neighbors. Most silver firs are old in their second or third century, pines in their fourth or fifth, while the Big Tree growing beside them is still in the bloom of its youth, juvenile in every feature at the age of old pines, and cannot be said to attain anything like prime size and beauty before its fifteen hundredth year, or under favorable circumstances become old before its three thousandth."–John Muir

We chose the Giant Sequoia for our fortieth Christmas Ale in celebration of the 150th anniversary of the Yosemite Act. Signed into law by President Lincoln during the Civil War, it granted the Yosemite Valley and the Mariposa Big Tree Grove to the State of California "for public use, resort, and recreation." The first such land grant in American history, it marked the beginning of the California State Parks.