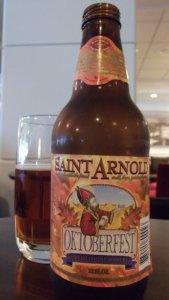 Copo ideal
Visite o website
A full bodied, malty, slightly sweet beer celebrating the Autumn harvest. This rich beer has a round malt flavor and an above average alcohol content perfect for a cool fall evening.

This style was originally brewed in Bavaria to celebrate the fall harvest. Then along came the wedding of the Crown Prince Leopold and his wife, Therese, and the brewers, sucking up to the royals, claimed that they had brewed this beer especially for their wedding. And what a wedding it was. It lasted two weeks. The wedding, that is. The marriage lasted longer. We're not talking about Britney Spears here.

The wedding was such fun that they decided to celebrate it every year and thus was born Oktoberfest. Technically, the Oktoberfest celebration is the two weeks that end with the first Sunday in October, thus most of the event occurs during September. But Septemberfest just didn't have a good ring to it, we guess.

The Oktoberfest was developed to be a lager recipe as is traditional for this style. Once we had settled on a final recipe, made with lager yeast, we decided to make a test batch with our house ale yeast for shits and giggles. When it came time to do our blind tasting to choose our beer, the ale version won by a large margin. And the ale took only two weeks to make versus seven weeks for the lager. Tastes better, brews faster, easy decision! The ale won out.

Upon release, we had many knowledgable people come up and tell us what a great lager we had brewed. When we told them it was an ale, they would suddenly start telling us how it tasted too fruity and was wrong for the style. These are people that you have to resist the urge to slap.

In the early days, our recipe development program went like this: First, we would do however many homebrews it took to get to a point where we were happy with the recipe ourselves. Second, we would invite people to come to the brewery and we would conduct a blind tasting. We would use two or three of our test brews and two or three commercial examples. These became family affairs--Kevin and Brock shuttling out tasting sets to people and Brock's wife Karen in the kitchen cleaning glasses for the next round. We don't know why we didn't think of using plastic cups. Fortunately, the results of these tastings always confirmed our instincts. We're not sure what we would have done if they hadn't.

In August 2002, we were filtering our first batch of Oktoberfest when we noticed it wasn't the right color; it was too light. We tasted it; it didn't taste right either. But it tasted good. But different. It turns out our maltster mislabeled some bags of grain and we didn't catch it during the grinding. Thus, we ended up with a batch of off-spec Oktoberfest. Our first thought was to dump it. But everybody who sampled it thought it tasted really good. So instead we sent out an email telling everyone we had a batch of off-spec Oktoberfest that still tasted really good although different. The result was everybody rushed out to get the off-spec batch and then bought some of the properly brewed Oktoberfest as well. It was an unintentional success, and since we explained the problem at the outset, our customers actually enjoyed the experience!