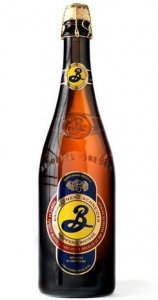 In May 2007, Garrett Oliver traveled to the 400 yr-old Schneider brewery in Kelheim, Germany, to brew Schneider-Brooklyner Hopfen-Weisse. This was dry-hopped with the local Hallertauer Saphir hop variety. In July, Drexler brought his yeast to Brooklyn and brewed Brooklyner-Schneider Hopfen-Weisse, choosing the American Amarillo and Palisade varieties for the dry-hopping. Now you can taste the result, the latest beer in our Brewmaster’s Reserve series. The beer has a full orange color and the aromatics pair the banana and clove notes from the Schneider yeast with the mango and citrus qualities of the hops. The bitterness is robust but balanced, and the beer has a clean, hoppy finish.
Brooklyner-Schneider Hopfen-Weisse pairs well with Caribbean seafood preparations, crab cakes, jerk chicken, Thai cuisine, Szechuan cooking and many Mexican dishes.”