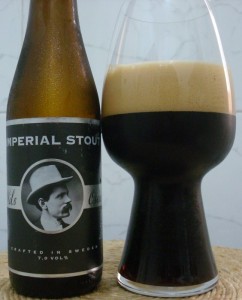 Tulipa
Visite o website
Imperial Stout is an extra strong stout. The flavor is rich and powerful with a sharp bitterness. Originally it was made strong and rich in hops to handle the shipping to remote locations. The name Empire refers to Catherine the Great of Russia. She was a great lover and importer of extra strong stout. During the 1700s, this beer variety was said to be a favorite of Catherine and the Russian court. Nils Oscar Imperial Stout has a special place in our heart because one of the ingredients in it is oat malt. When our Imperial Stout was brewed malted we used the oats from our own malt house at Tärnö Manor. It was thus a start for Nils Oscar Oats Malt, which is another story and product. There is a sideline we can’t go into here and now, but we managed to kill two birds with one stone - Nils Oscar Imperial Stout and Nils Oscar Oat Malt. One would not have been anything without the other.


INTERESTING FACTS
This beer can withstand storage. Such strong beer requires a long storage time for it to mature and become harmonious. In return, it ages in the bottle for many years after bottling. Most likely it will be at its best when it is between five and ten years old, but for guarantee reasons we stamp sustainability up to 6 years. It is therefore important to try things out and form your own opinion of what storage time you appreciate most.

In addition to that, we can say that the character is somewhat roasted with hints of dark chocolate and mocha. Even tar can be detected by the sensitive nose. The color is dark, almost black. We have used corn and different varieties of barley malt as we made ??our stout. In addition, large amounts of roasted barley is used. To balance the strong malt character, we use plenty of hop varieties like Magnum and East Kent Goldings which contribute to the exquisite aroma.


TASTES GOOD WITH:
It goes well with oysters, seafood, chocolate and chocolate dishes.