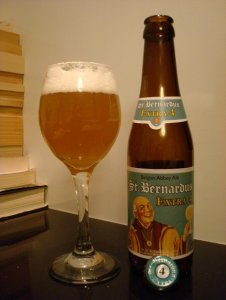 Copo ideal
Visite o website
Back to the roots: In the summer of 2014, Brewery St. Bernardus will bring one of their oldest beers back to the market. When the brewery was founded in 1946 to brew and commercialize the beers of the Trappist Monks of Westvleteren, the brewery received 4 recipes from them: Abt 12, Prior 8, Pater 6 and Extra 4. In the 70's this 'Enkel' or 'Single' style got out of fashion and the production of the Extra 4 was discontinued. In origin, the Extra 4 was brewed by the Monks for their own consumption, but this beer is seldom sold in Belgium or abroad. The Extra 4 is brewed in the classic 'single' style and is a light gold colored beer with a ABV of only 4,8%. It is a beer of high fermentation, bottle conditioned and full of flavours. It is brewed with more hops than usual for the other beers of Brewery St. Bernardus. The Extra 4 will be available in limited quantities each year on May 15 for all customers in Belgium and abroad. Available in 33cl and 20L kegs. Did you know: Single or 'Enkel' is the base of all Trappist and Abbey Ales. Later a Double and a Tripel were added to the range. These names refer to the amount of malt (x2, x3) that was used in those days to brew this type of beer.